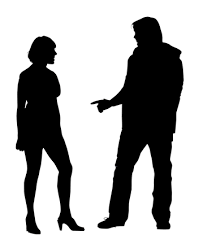 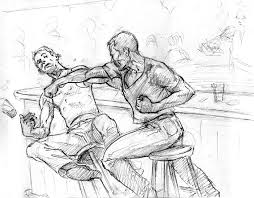 Sitting quietly in the far corner of the room, Jazzy listened and watched.  A storm was brewing.  It’s gray blue puffs of smoke swirled through the room toward her.  It was the heat emanating from the two men facing off across the pool table.

Both were big and burly, drunk and loud.  She didn’t relish the idea of taking on either  especially not both of them in their current state.  If it came to fisticuffs,  she’d intervene, whether on or off duty.  As it happens, she was off duty, but the only patrol car available, was currently on the far side of town and when last she checked, involved in a fender bender. It would fall to her to take action.

The heated argument had escalated.  They had progressed beyond yelling into pushing and shoving, pool cues at the ready.  The larger of the two men hurried around the end of the po0l table and jabbed the other.  That was the beginning of the end.  The second man took a swing, missed and gigantor landed the pool cue across his head.

Both men were enraged landing blows with their fists.  The other bar patrons either moved out of the way or egged the two men on.  It was Saturday night and they were in the mood for a good brawl.

The smarter patrons moved aside when they saw me moving toward the fray.  Some sneered, others looked amused.  “Fellas!  Fellas!  Break it up.  Let’s leave the bar in tact so we can all enjoy our beer.”

The first man turned to stare at me, and the other took advantage and decked him with a solid right hook.  He bounced off a bar stool, hit a table which spun in a semi circle finally toppling over amid broken beer bottles and glasses.  Gigantor landed on the hard wood floor like a sack of potatoes.

One down, one to go I thought.  “Ok, buddy, put the pool cue down and walk away!”  I instructed.

“Who the hell are you?”  he growled in response.

“Your worst nightmare, so don’t tempt me.  Walk away.  At the moment, it’s just a brawl, don’t make it worse.”  I flipped up my collar and displayed my badge. “Officer Jazzy Morton, at your service.”

“Whats a little thing like you gonna do?” he asked menacingly.  So I showed him.  I might be small, but I pack a punch too.  I caught him unawares, kicked him in the balls, caught him with a sidewinder across the jaw in his bent over position and finished him off with a crack to the back of his neck.  He was down and out.

The crowd was cheering.  “Guess we know who won that argument!”

I handcuffed one and asked the barkeep for some zap strap and took care of gigantore and waited for back up to arrive to haul the two to the jail for the night.

Yep, might came in all sizes  and though I didn’t start the argument, I finished it.  As I looked around the patrons to see if there were any more takers, I noticed a tall good looking man standing off to the right.  It appeared he had been ready to intervene.  A twinkle lit his eyes and a crooked smile played out on his lips.  He winked and walked away with a swagger.  All I could think was, well damn!  Another time another place, and it might have been fun to argue with him.  I couldn’t help but smile.