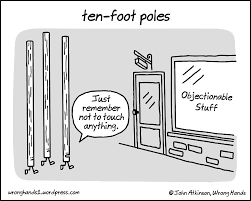 In years gone by women considered a ten

Men felt empowered if and only when

A woman such as Boe Derek was on their arm

Women objectified not desired for their charm

Any woman that was considered less than

Was not contemplated part of the plan

Even now many years later

A misogynist, a true woman hater

Considers women with intellect and brains

Such a threat he often calls them names

Too often society lives by the creed

If you’re not perfect you must concede

To sitting on a shelf, undesirable at best

In you, they saw nothing in which to invest