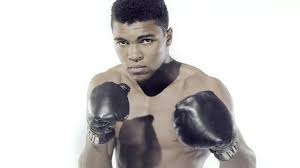 (First thought that came to mind)

Who hasn’t heard of Muhammad Ali

His birth name was Cassius Clay

A boxer who fought in light and heavyweight bouts

He reigned as undisputed heavyweight with clout

Refusing conscription into the US military

He was charged as a draft dodger and hence found guilty

He successfully appealed, the decision overturned

After boxing, in charitable works he was concerned

He stood fast in what he believed

To his honour he continually cleaved

Although not personally a boxing fan

I have to admire the boxer and the man